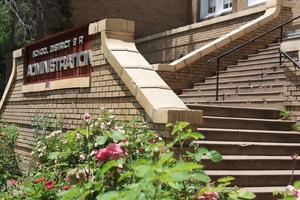 We appreciate the patience of our community as we investigated a concern that surfaced on Monday regarding what appeared to be a school-sponsored student protest that evolved into public misbehavior on the part of students on Friday, October 2. We recognize that because this event focused on matters that may have different reactions and opinions within our community, it did evoke a lot of emotion.

On Friday, October 2, students at Miller Middle School approached a teacher about their desire to organize a march around climate change to educate our community about the concerns they hold around that issue.  The teacher encouraged the students to express their voice..  An announcement was permitted on the Miller PA system regarding the event and some flyers were distributed by students in the building.  The teacher volunteered to attend as a private citizen in support of the students who desired to organize the event.  Students arrived at Buckley Park at 3:45 pm with their own signs they created outside of school; some high school students also participated.  As the students walked down Main Street, the teacher followed them along with her own small children.  As they approached a business that had candidate signs with which some students seem to disagree.  A couple of high school students began to make inappropriate gestures to patrons and employees within the business.  At that point in time, the teacher, feeling it was not a school-sponsored event and being in supervision of her own young children, was not vigilant in supervision of the inappropriate behavior and the behavior was not immediately addressed.    The inappropriate actions did not center around the issue of climate change; however were set off by students' unfortunate reaction to particular political candidate signs.  The behavior observed in front of the business on video and the actions that caused patrons within that business to feel uncomfortable were unfortunate and detracted from the message that the student organizers hoped to relay.

In conversation with the school, it is agreed that particular actions undertaken did give the appearance that the event was school-sponsored and steps have been taken to rectify this so that no such future activities will occur in that manner.  The students whose behavior was observed that violates our student Code of Conduct which prohibits "directing profanity, vulgar language, or obscene gestures toward others," have been addressed by their school administration in an appropriate manner.  Conversations with the owners of the business who appeared to be targeted have brought to light major efforts undertaken in reducing waste and addressing the very climate change issues students were passionate about and have been shared with students who feel passionate about that issue.  We regret any negative light the actions of our students placed on the business.

It is unfortunate that a student-led event had such a negative impact.  Our staff regrets any such impact that occurred as it was outside the scope of the middle school students' intent.  The topic of climate change was not a topic that was being covered in our curriculum or classroom and only surfaced from student-led conversations.  The encouragement of our students to participate in public dialogue has always been our platform; however, our district is apolitical in our role and strives to ensure that controversial topics and conversations regarding such take place outside of our school walls and do not involve school resources.  Our employees, like all citizens, have their own personal beliefs and are free to share those outside of the workday and outside of the presence of their students.

This incident demonstrates the challenges in our society where even our students mimic poor behavior observed by individuals through the media and at community events.  As a district, we want to help our children learn appropriate expectations for public behavior.  We continue to long for the modeling of civility and the ability to respect different points of view and opinions and still get along.  The district is committed to ensuring that when violations of our policies take place, we will investigate the matter and take steps to address them in a way that allows learning experiences and growth for our staff and students.  Of course, all students and staff actions as a result of any such violations will be addressed in a confidential manner as required by law.

Please never hesitate to reach out to Superintendent Dan Snowberger should you have questions or have other concerns that surface.  He can be reached at (970) 375-3819 or [email protected].